A “theme”, in ERNiE, consists of the intersection between

ERNiE distinguishes c. 20-25 Cultural Currents and c. 70-75 Cultural Communities, so that theoretically the number of Thematic Articles could come to c. 1600; but not all Communities are in all respects sharply distinct, and not all Currents are meaningfully represented everywhere. 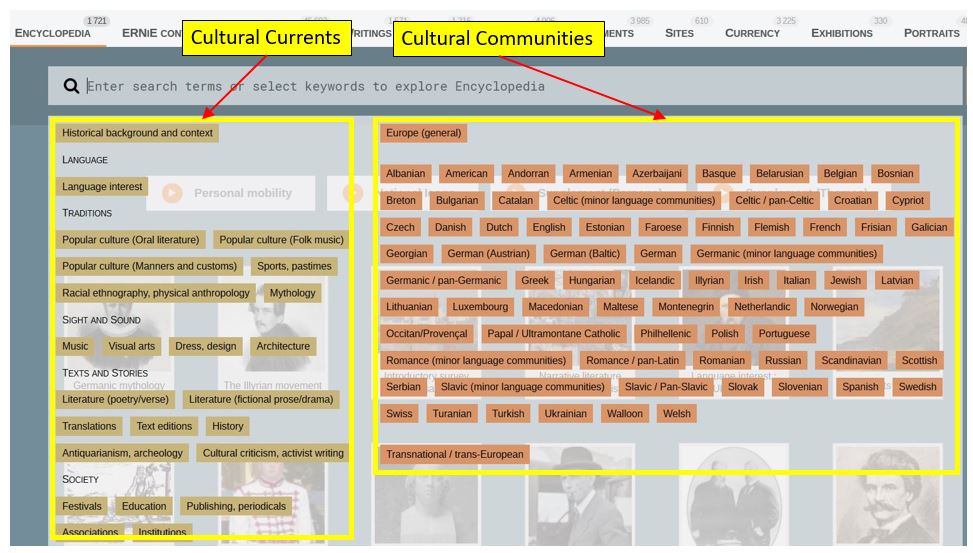 The Cultural Currents are, for the sake of searchability, grouped into five large fields:

At the head of the dropdown list, the rubric Historical background and Context can be used in combination with a Cultural Community tag for general background articles on the political and social history of that nationality during the 19th century.

Cultural Communities are listed alphabetically; a full list of these is given under the tab “Cultural Currents and Communities”, with cross-references for those communities not separately noted in the on-screen drop-down menu (e.g. Ruthenian > Ukrainian; Corsica > Romance - minor language communities).

In the case of Thematic Articles, as with Person-Related Articles, it is recommended that users explore the wider connections by means of the relational tabs.